Day two, and a few creaks getting out of bed, our team was once again ready to go after a hearty breakfast.

We all went to our project work sites and got to work immediately, continuing the tasks we started yesterday.

Our Tiny Homes group went back to their neighborhood, and yes, it is starting to look like a mature community! Our crew had a lot to do, including installing lighting and finishing the electrical work. They now have 11 homes between those already finished and those under construction. The first four homes are coming up on their one year anniversary of occupancy.

Our World Building crew continued to do the heavy lifting of cleaning out the loading docks and bays, and getting ready to paint. They also made the area ready to reopen the bricked up windows to install glass bricks, once again bringing light to this part of the facility. We also learned a few things about the plans for the World Building. They already have work areas where job skills are taught by making mats of recycled tires, and coasters of re-purposed glass and wood from old houses. One mighty crew! 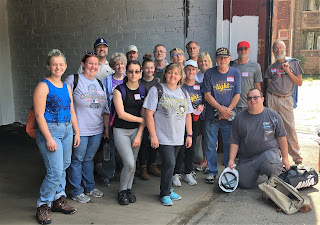 Another crew explored a new area - Cass Green Industries! This facility processes and shreds paper from local businesses, as well as provides resources for lawn care, maintenance, a worship space, and even lumber for building projects, as seen below! 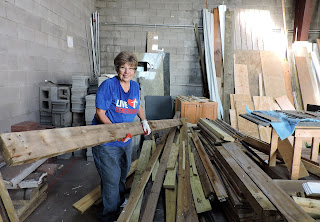 Our Wesley House group continued to labor in the attic, putting down much needed insulation. They also worked in the blazing sun to paint the very weathered trim. This job was tough to get to as they needed both scaffolding and access to the roof through Pastor Sue's own apartment. It was very gracious of her to provide access through her home. 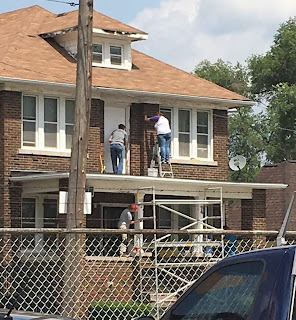 More work is in the plans for tomorrow, as well as some tours of the Cass ministries and the people they serve here!
Posted by Unknown at 8:58 PM No comments:

It seems like this afternoon was even busier than the morning! We have seven work teams working on several facilities.

One of our work crews worked at the Cass church, repairing and glazing windows on the second floor. A lot of maintenance is required on the windows, but once completed they will be secure and weather resistant. 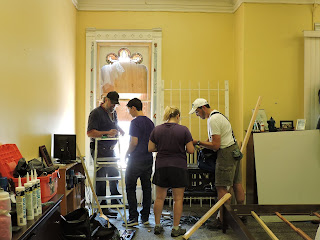 Our World Building group did a lot of general moving and cleaning of their loading bay. There had been a lot of items stored in the bay, and it all had to be dismantled and removed - furniture, cabinets, paint, etc... Our crew made short work of this task, and the area is now ready to begin painting. 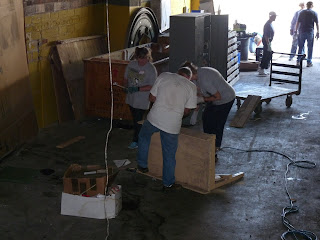 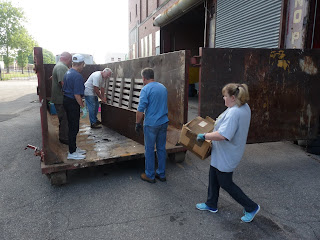 Our star drywall team worked on an apartment building, and which we had visited two years ago on our previous visit. The apartments we had worked to clean are now occupied by single parent families. Some work was still required, and the drywall should be finished tomorrow. 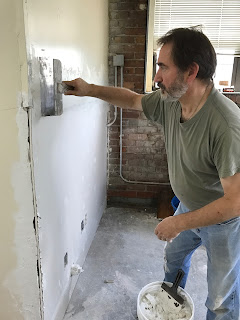 Two additional crews worked in the attic of Wesley House, and a couple Tiny Homes still under construction. We don't have photos of these work sites, yet, but here is an illustration of just how tiny these new homes actually are.

As always, a lot gets done in a short time with this amazing group of dedicated people. Come back to check often with updates of the work we've done, and the people of Detroit.
Posted by Unknown at 8:23 PM No comments:

Lay of the land and beginning work projects.

As a result of several minor delays, we ended up getting to our hotel about 2 hours after we originally expected. This meant our crew only had time to unload the bus, find our rooms, and get some sleep to prepare for our work day, which would come very early the next morning!

This morning, we woke up at least somewhat rested, and enjoyed a hearty breakfast before loading the bus to head to the Cass work sites. Rev. Sue Pethoud, the Cass Church and Community Relations Liaison met our crew and shared some of the history of the area. 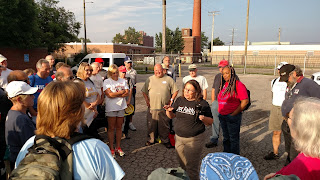 Some interesting things she pointed out included that the downturn in the community began nearly 100 years ago, in the 1920's! In response to social and economic changes in their community, Cass Community United Methodist Church has continued to respond by keeping their neighborhood and its people as their reason for being.

This led to the creation of Cass Community Social Services as a separate entity from Cass Community United Methodist Church in 1995. Since the early 2000's, when they had only 3 buildings, they have grown to include 11 buildings, and coordinate over 6,500 volunteers each year. Everything they do is designed around rebuilding the neighborhood and bringing a sense of community to the people they serve.

You can read more about their long and dynamic history here:

Our team broke for lunch, and shared the food line with Cass' clients in their cafeteria. Our menu consisted of BBQ chicken, baked beans, mac and cheese, tomatoes, coleslaw, corn on the cob, potato salad, and a green salad. What a feast!

This afternoon, we are returning to our work sites, to continue helping Cass help their neighbors. 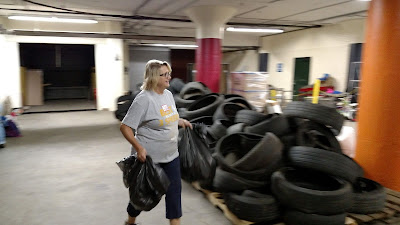 In anticipation of our next posting, we will compile all the wonderfully graphic tales from all our work crews.


Come back for more mission insights!

Posted by Unknown at 1:32 PM No comments:

For this year's interfaith service trip, we are heading back to Detroit, Michigan. 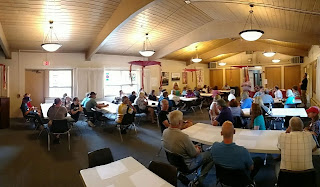 Our team enjoyed meeting up and eating a great lunch at Grace Lutheran Church in Mount Prospect, Illinois. We had a chance to meet one another, meet the leaders, and of course pack the bus, vans, and trailer. 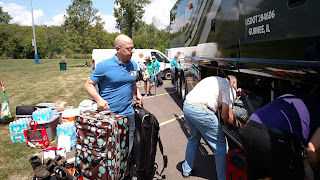 Our next stop is the Steaks Eatery in Jackson, Michigan. We will have a chance to share another meal together, and get to know each other a little more before getting to work tomorrow morning.
Posted by Unknown at 6:30 PM No comments:

Please enjoy this well done news piece on working with housing issues in our cities!
http://wgntv.com/2017/11/14/growing-homelessness-in-chicago-caused-by-lack-of-housing-resources/
Posted by Unknown at 9:32 AM No comments:

Our Hearts Remain in Missouri!

Our crew was able to sleep in this morning, with our bus leaving for home around 8:45. Most of us were up earlier, and enjoyed the time to relax at breakfast, pack, and catch up with the work we did this week.

Once on the road, we enjoyed a smooth ride until our lunch break at Imperial Buffet in Normal, IL. The owners did a great job welcoming us, and giving us a room where we could continue our conversations. The food was good, and of course, the company was comfortable with one another.

We returned home after enduring the Chicago rush hour traffic and some tremendous rain storms, but arrived safely.
We unpacked the van by around 4:30, loaded our cars, hugged our friends old and new, and bid farewell until next year. Many of those new to our trip, as well as those who have traveled before, were already looking forward to next year.

We also have our first "Road Show" presentation of this year's trip scheduled! Please come to Messiah Lutheran Church in Wauconda on October 15. More details to come!
Posted by Unknown at 4:47 PM No comments:

Another hot day, and visions of the end pull us through!

A new site in High Ridge had us working on manufactured homes for lower income residents. Here, we met up with another group from Michigan, working through National Relief Network (NRN). This crew consisted of mostly younger adults and high school students.
﻿ Our team split up to work on a few homes. One crew cleaned up a concrete slab to prepare it for a new home to be built, picking up glass and preparing the ground after the home which originally stood here was destroyed. Another home had serious water damage, and needed new flooring and drywall. Our team was able to prepare the walls and get the floor insulation layers ready. Most of our team worked here, and made some great progress!

Another home needed some exterior painting, while yet another had years of moss which needed to be power washed off. This last home also had a family living in it which had some local enemies, so there were shot gun pellet holes all through the siding and windows which would eventually be repaired. This family no longer lives here, and another couple came by, interested in moving in when the work is done. They seemed very thankful of all the work we were doing, and we had the promise that each home we touched this day would host an appreciative family in the near future, no matter their condition today. We can all aspire to gratitude such as theirs!

Our Fenton project continued! Our crew finished working in the basement, and completed removal of the soffits. We filled two complete dumpsters with materials from the four units, and the buildings are ready for the next stages of reconstruction. The work crews which follow will have a good foundation on which to rebuild these homes for underprivileged families.

We also filled in some more information about our Eureka home! This two story house was flooded to nearly the top of the first floor, which was cleaned and prepped by a previous work crew. This left us working on the electrical by standing on boards laid over the open floor joists, and two stories of siding.

﻿﻿In addition to the changes our group is facilitating by our labors, our crew here even found one small, lonely lily on the grounds around the house, not trampled or damaged. It wasn't blooming, and looked much like any other tall weed in the area - until our last day. The flower bloomed, almost as if to give our work crew, and the family who lives here, hope for the future!

The Florissant team finished the basement, and moved all of Carol's things back downstairs so the storage unit in her driveway could be returned. The Metropolitan Sewer District (MSD) is now ready to begin work installing a sump system, making Carol's house safe for many years to come.

﻿﻿
When our Fenton crew finished, they came over to High Ridge, and we realized that our team was now too big to fit in the work spaces when combined with the NRN team. Our project leaders, Denise and Chris, found a church which needed some cleaning help, and our team jumped at the chance to work in an air conditioned environment! Our combined crew headed to St Mark's church, where the custodian, Dan, put us to work with cleaning their windows and other spaces which needed attention.
﻿﻿As a celebration of a job well done, our last night was spent trying to solve a murder mystery at the Bissell Mansion! It was a great time of comedy and sleuthing, and our team of characters left our hosts in stitches. Pastor Eric was deemed the best "Les" they ever had! A fun way to wrap things up.

Posted by Unknown at 4:34 PM No comments: